“Two terrible years of war,” Margaret says in her diary for 4 August, a day when she received further bad news - her younger brother Jack had been injured in combat. Friends rushed to the Higgins household to hold a vigil as they waited for news.

Families were often told very little after a soldier was injured, other than that their condition was stable and non-serious, and they would be notified immediately of any change. It was over a week before Jack was able to cable his parents from his hospital bed in London, and inform them that his injury - a gunshot wound to the arm - was fortunately a minor one.
​
Nor was there any further word on the fate of Margaret’s friend, still missing without trace, though she recognises that the possibility of good news is very slim. "Oh unhappy day,“ she says on the 13th. "Poor Frank McKay missing since July 20th. No hope. Lord have mercy on his poor soul. I cannot realise it.”

There was a welcome respite on the 11th, when Margaret travelled to the Haymarket Theatre for a special occasion: the release of Tangled Hearts, the first American film of the Australian-born film star Louise Lovely.

The notion that Louise Lovely was Australia’s first international star of film is somewhat overstating the matter - Marrickville-born swimming star Annette Kellerman is just one of several candidates for that role - but there is no doubt that she became one of the highest profile.

It appears that it was the canny marketing of Universal Pictures that suddenly inspired Australians to remember the vaudevillian named Louise Carbasse who had appeared on their stages with her husband, Wilton Welch, only a few years earlier. Though she had also appeared in several Australian films, they had not received wide promotion or distribution, and as far as many Australian viewers knew, the film that Margaret saw was Louise’s film debut.

It seems that Margaret did not attend vaudeville - at the time considered a rougher cousin to legitimate theatre and potentially unsavoury entertainment for a Catholic girl - so it is unlikely that she ever saw Louise Carbasse on stage, but the fact that she was thrilled that a young Australian woman like herself was making a name in the film business can be judged from the fact that whenever Margaret saw one of her films during 1916, she noted not the name of the film, but the name of the star.

Tangled Hearts, which is now lost, told a rather melodramatic story that was outlined by Sydney’s redoubtable Sunday Times. It is a peculiarity of silent era reviews that crucial plot details were frequently revealed - a possible annoyance for readers of the time, but fortunate for us today when they are all that remain of many pictures:

Montgomery Seaton (Hayward Mack) and his wife, Lucille (Louise Lovely), are society folks. Among their friends are John Hammond (Lon Chaney) and his wife, Enid (Agnes Vernon). Enid and Montgomery were once sweethearts, and she confides in him. Before marriage she had a child, and through the death of a friend she had now to find a new home for the child. Lucille sees them together and is jealous. Montgomery pretends to Hammond that he wants to find a home for his child, the mother threatening to expose him unless he looks, after it. Hammond agrees, and Enid has her own child.

Vera Lane and her wooer, Ernest Courtney, are also friends of the Seatons. Lucille finds some verses Montgomery has written for Ernest to give Vera, and her jealousy grows. Her suspicions increase when she hears that Montgomery has taken a girl, Enid's daughter, to the Hammond home.

Vera consoles Lucille, and tells her to try to win her husband back by flirting with other men. Enid writes a letter to Montgomery, expressing her gratitude to him for getting her child into her home. Hammond finds it, and is shocked to learn that the child is his wife’s and, presumably, Seaton’s. Hammond confronts Enid and Montgomery with a revolver. Hammond takes Enid home, and Vera persuades him to forgive her.
​
Louise would make a number of films with Lon Chaney - later legendary as a horror actor, but an equally fine dramatic character actor - as well as with her female co-star, Agnes Vernon. Renamed “Brownie” Vernon, the latter would go on to repay the favour to Australia, to which she would travel in 1919 to become the leading lady for another local star, Reg “Snowy” Baker. 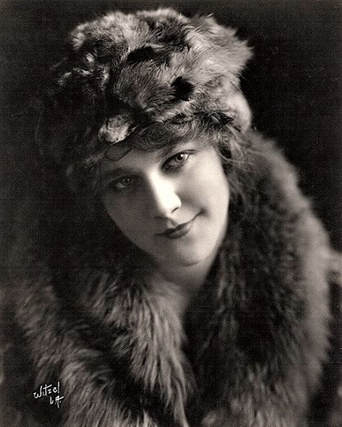 Known during her stage career as Louise Carbasse, Louise loathed the syrupy name given to her Universal Pictures tsar Carl Laemmle, the circumstances of which were explained by Melbourne's Punch:

When she first arrived in America, or rather when her first picture arrived, there were neverending mistakes in the spelling of her name, until wires were shooting all over the country to ask how she spelt herself. Laemmle, who was at the first showing of her picture at the Universal offices, kept saying “Isn’t she lovely ?” Everybody said the same. Then the head of the Universal ask ed her name, and everyone said something different, till finally, Laemmle exclaimed, “Oh, let’s call her Louise Lovely !” And Louise Lovely she is.“

The truth was even more complicated than that. Numerous trade reports agreed that Louise had decided to eschew 'Carbasse’ as too difficult to spell, but had settled upon her married name, Louise Welch, as the alternative. No later had this been announced than she was rechristened a third time. "General Order No. 9360 - To all Universal Publicity Men: Kindly arrange to have Louise Carbasse-Welch-Lovely reach at least an approximate decision regarding her name before October,” joked Motion Picture News in early 1916. “The next issue of Motion Picture News Studio Directory goes to press then, and we want to know who she’s going to be.”

Universal’s choice may have had less to do with pronunciation and more to do with positioning Louise as a challenger to another 'lovely’ screen star - Mary Pickford. 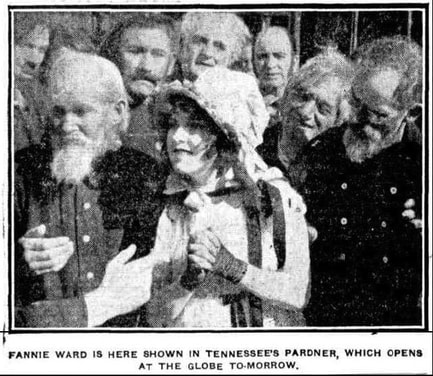 Source: Sunday Times (Sydney), 13 August 1916
Although she did not mention the film in her diary, perhaps Margaret enjoyed The Cheat better than we are aware. At the end of a difficult month, she revisited the film’s star, Fannie Ward, in Tennessee’s Pardner. The venue was Waddington’s Strand Theatre, which once sat on Pitt Street, approximately across the road from the still-extant Strand Arcade. It was demolished in 1928 amidst ambitious plans to construct a new shopping arcade between Pitt St and Castlereagh St which were never realised - at least, not until many decades later.

The tale of Tennessee’s Pardner was adapted from the famous short story about the ‘Forty Niners’, or participants in the California Gold Rush, by American frontier author Bret Harte. The adaptation was a very loose one - for one thing, the 'Tennessee’ of the original version was not even a woman. “Apart from the title of the setting … the play has not much in common with Bret Harte’s story,” grumbled Melbourne’sPunch. "All the same, it it a fine drama well produced and acted."

The Tennessee of this version was a 'waif of the plains, a child of the desert,’ according to the Sunday Times - a baby who is abandoned by her mother after her father is shot, and brought up by a group of kindly 'Forty Niners’ who christen her 'Tennessee’. One of the miners, Jack Hunter (Jack Dean) vows to make the girl his 'partner’ in every gold discovery he makes. The baby grows up into a beautiful young woman, who becomes curious to know about her parents. Little does she know that the man who killed her father now has romantic designs upon her.

"No expense has been spared, by the producer to build up the surroundings of the great past as a fit setting for the picture,” reported the Sunday Times. “In a break we are taken back to those roaring days of '49, with all their brutality, their charm, and their dangers. Bret Harte was a 'Forty-niner himself, and he knew what he was writing about when he told his wonderful story. [Producer, Jesse L.] Lasky has not failed in his efforts to make the picture ring true.”

A number of beautiful sequences were shot at the famous San Fernando Mission in California. “This wonderful mission, with its many rooms and outbuildings, was built by the Jesuit priests, with the assistance of theIndians, in the early days of the 19th century,” explained Sydney’s Referee. “It was in one of these missions that the little girl Tennessee was brought up under the guidance of an old priest, before being taken to the little mining town of Sandy Bar.”

It was the leading lady who scooped the lion’s share of critical plaudits. “Rarely has a woman artist brightened the screen more delightfully than Fannie Ward in this picture,” raved Moving Picture World. Character actor Raymond Hatton also received admiring notices. He would go on to appear in literally hundreds of Westerns, the last of which he shot almost exactly fifty years after filming his role in Tennessee’s Pardner.

Margaret seems to have been very fond of the Western genre, and gave Tennessee’s Pardner one of her best reviews of the year: “Splendid.” The film survives in full in a beautiful 35mm print, which appeared several years ago at the annual Cinecon classic film festival in Hollywood. 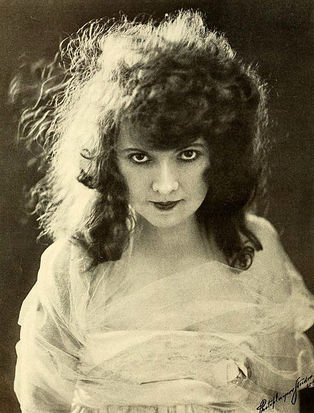 Source: Photo-Play Journal, January 1917
Part of the curious fascination of Fannie Ward was her preternaturally girlish appearance. By the time she made The Cheat, she had already been a well known stage actress for a quarter of a century, and when she played a teenager in Tennessee’s Pardner, she was 44 years old. Much speculation centred on exactly how she maintained her youthful looks, one theory suggesting that she injected her face with paraffin wax, which occasionally melted under the stage lights!

Ward claimed that her looks were the product of nothing more than skipping breakfast, eschewing white bread and red meat, and a daily application of ice to the face as a 'muscle tightener’. The rather taut smile she displayed in later years suggests that an early form of plastic surgery made the greater contribution. Ward delicately avoided questions, admitting that she supported what was already called 'face lifting’ when it was absolutely necessary, though adding “Most women don’t need facial surgery. They could do a lot for themselves without it.”

Ward continued to play on her youthful looks well into the late 1920s when, aged sixty, she opened her own beauty parlour called The Fountain of Youth, and appeared on vaudeville as 'The Miracle Woman’.