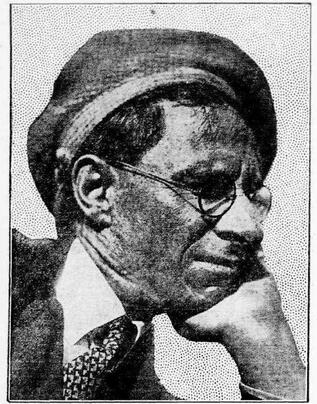 Cyril Charles Bentley Samuels was born on 29 January 1895 in Sydney. In 1916, at the age of 21, he enlisted to fight in World War I, describing himself variously as a journalist, proofreader, and freelance writer. He fought in France alongside the remnants of the 57th, 59th and 60th Battalions, whose ranks had been decimated in the tragic Battle of Fromelles a few months earlier. Though he was invalided home with a shattered tibia little more than a year after he arrived, he remained an outspoken advocate for the rights of returned soldiers for the rest of his life.

Having spent his journey back to Australia illustrating a company magazine published aboard the SS Berrima, Samuels began work as an editorial cartoonist for Sydney’s Evening News, specialising in sports commentary. Boxing, cricket, tennis and horse-racing provided ideal subject matter for his entertainingly elastic style. 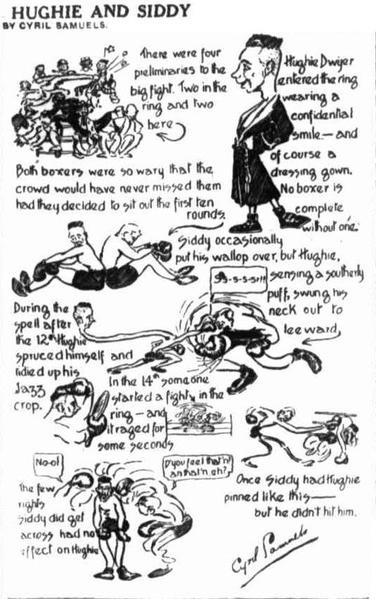 Sports Editorial cartoon by Cyril Samuels. Source: The Evening News, 16 October 1922.
Samuels was also called upon to create a cartoon version of 'Percy Public', the satirical figure the conservative Evening News had created in order to complain about high taxation and inefficient government.

This assignment is particularly ironic, as it appears that Samuels' own politics were much more progressive. Aside from writing evocative poetry for the Labor Daily, he joined political radical Syd Nicholls in becoming a founding member of the Black and White Artists’ Society in July 1924. Still in existence today as the Australian Cartoonists’ Association, it is thought to be the world’s first society formed to fight for the rights of working cartoon artists. With many Australian newspapers opting for cheaper American syndicated comics, the issue was a live one in the early 1920s, and for long afterwards.

Particularly after his marriage in 1923, Samuels moved away from editorial cartooning and towards straight gag-based humour, often with a domestic angle. Those Terrible Twins began appearing in the Sunday News in mid 1924. 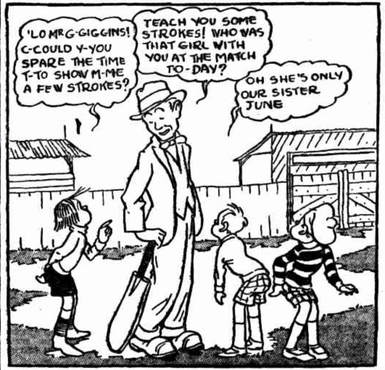 Those Terrible Twins introduces us to fraternal twins Tommy and Joe Smith. Golden-haired Tommy appears to be the leader of the pair, while Joe is distinguished by his shaggy Dutch Boy haircut and stutter. Various neighbourhood children join them in typical childish escapades such as playing practical jokes, avoiding chores and cooking up moneymaking schemes, often to fund their favourite pastime of playing backyard cricket.

It is unlikely that this assignment was much of a passion project for Samuels, and his artwork lacks both the anarchy and the polish of his editorial cartoons. The reader can see him grappling with the additional demands of the genre - detailed backgrounds, perspective, and the drawing of women which, as a sporting cartoonist, was not something he had previously needed to master.

In December 1924, Those Terrible Twins was syndicated to its first interstate publication, Adelaide's Saturday Journal,  and a new storyline was introduced. The twins encounter a famous cricketer known as Giggins, whom they immediately interrogate for his best cricketing secrets. Giggins is more interested in the boys’ previously unmentioned elder sister, a flapper named June. The cricketer’s attempts to woo June while fobbing off her pesky brothers formed the very simple premise for much of Those Terrible Twins’ subsequent run.
​
Like Jim Bancks, Samuels gradually attempted to broaden the twins’ world, introducing some amusing neighbours and giving names and personalities to the minor characters - though it might be noted that many bore a startling resemblance to the mates of Ginger Meggs, particularly ‘Nobby’, a dead ringer for Ginger’s best friend ‘Benny’, and ‘Horatio’, likewise a double for Us Fellers’ golden-curled sissy ‘Cuthbert Fitzcloon’. Those Terrible Twins was far from the only comic to wear its inspiration so obviously on its sleeve, usually at the behest of editors with a close eye on circulation.

Routine though the comic was, somebody somewhere had bigger plans for Those Terrible Twins. 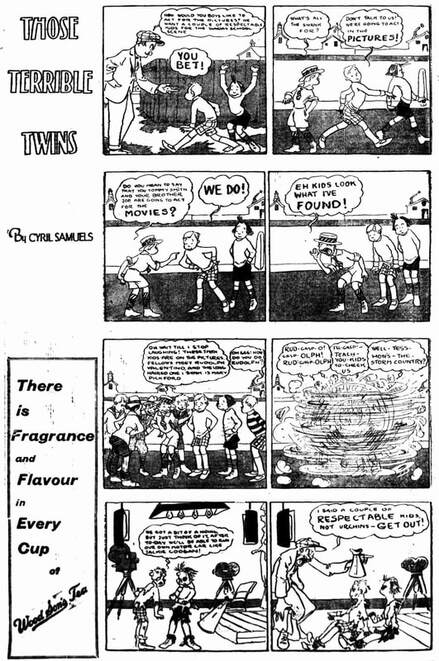 The twins contemplate movie stardom. Click for a larger image. Source: Saturday Journal (Adelaide) - 16 May 1925
A ‘THOSE TERRIBLE TWINS’ FILM
​
On 17 November 1924, the Evening News posed a question to its readers:

Can You Write A Story For A Motion Picture?
A $5 prize will be paid for the best 1000 word story of 'Those Terrible Twins’ as featured weekly in the Sunday News comic supplement provided it is adapted to the screen. All who enter should forward stories to publicity department, Premier National Pictures, 305 Pitt-street.
​
Aside from the word limit, the rules decreed only that the story should be 'Australian in locale and sentiment’ and 'must feature ‘Those Terrible Twins.’
​
Little more was said about the competition. The newspaper contained no announcement of a winner after the 6 December closing date, so it is not clear whether Premier National Pictures received an answer to their rhetorical question - though at least one other strip appears to make reference to the boys’ status as Australia’s next movie stars. 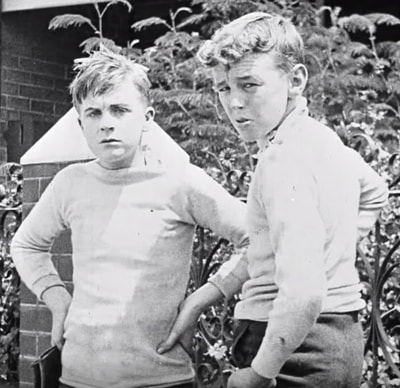 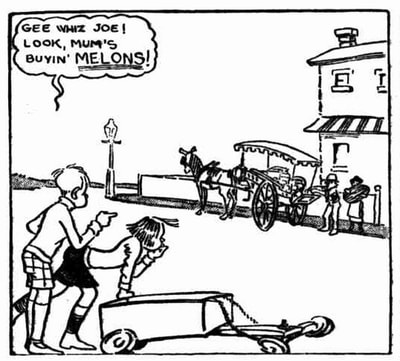 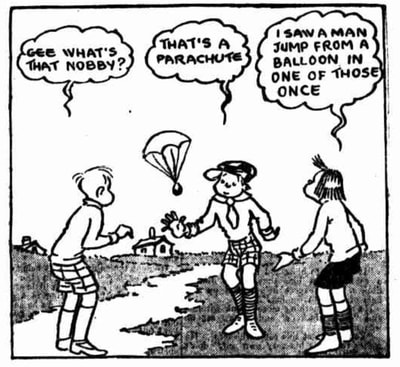 Watching what remains of the finished film, it is plain to see that it did indeed begin life as an adaptation not of Us Fellers, but Those Terrible Twins. The two stars wear the same long jerseys, shorts and knee socks as the Twins. While no attempt has been made to replicate Joe’s exaggerated Dutch Boy hair cut, the actor’s hair appears to have been artificially spiked to ape the cartoon version’s cowlick. Giggins - whose storyline was introduced into the strip only a week after the Evening News' appeal for a Terrible Twins screen story - becomes ‘Graham Trent’, the famous cricketer who attracts the attention of cute ‘Susan Meggs’ - Ginger’s previously non-existent sister, who is clearly June, the twins’ sister. 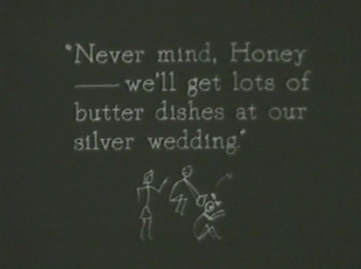 Illustrated intertitle for the Christie Comedies production 'Her Bridal Night' (1920)
Overseas attempts to bring comic strips to the screen may have been influential upon Premier National Pictures’ choice of subject matter. In 1920, American media mogul William Randolph Hearst had commissioned Al Christie’s Christie Comedies to produce Jiggs and the Social Lion (1920), an adaptation of the comic Life With Father, which appeared in his newspapers. As was later noted in a review by the Sydney Morning Herald, Those Terrible Twins betrayed at least one clear influence from Christie Comedies: the use of stick figures to humorously illustrate the intertitles.
​
The spaghetti-legged stick figures of Those Terrible Twins, however, are quite different from those in Christie Comedies, and bear an unmistakable imprimatur: none other than that of Cyril Samuels. 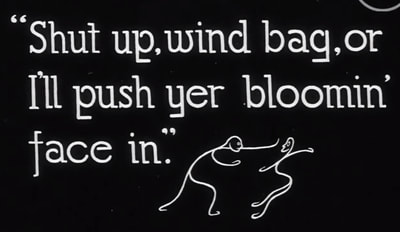 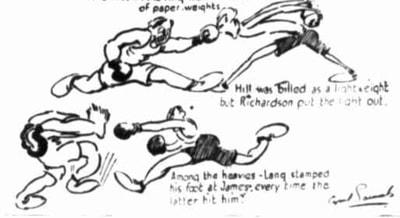 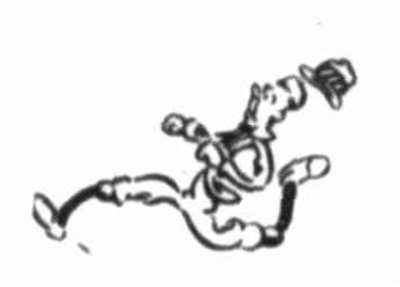 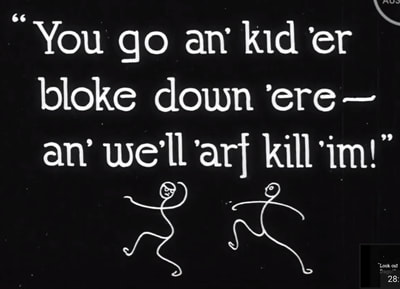 Intertitle from 'Those Terrible Twins' (1925)
A Fatty Finn Appearance?

Nor, perhaps, were Joe and Tommy Smith the only comic strip characters to appear in the film as originally envisioned. Amongst the boy’s pals is a larger boy with a buzz cut, a penchant for food, and a slightly cowardly disposition. Not only does he bear a startling resemblance to the twins’Sunday News stablemate Fatty Finn, but the intertitles specifically name him 'Fatty’.

The appearance of ‘Fatty’ is doubly intriguing, given that the character of Fatty Finn was then in the midst of his transition from awkward fat boy to All-Aussie hero - a transition that was complete by the time Fatty made his first official screen appearance two years later in The Kid Stakes (1927), by which point Those Terrible Twins - both comic strip and film - were already long forgotten.

While the name of ‘Fatty’ was sufficiently generic to deny that he was in fact the Syd Nicholls character, it is likely that many fans of the comic would have made the connection nonetheless. 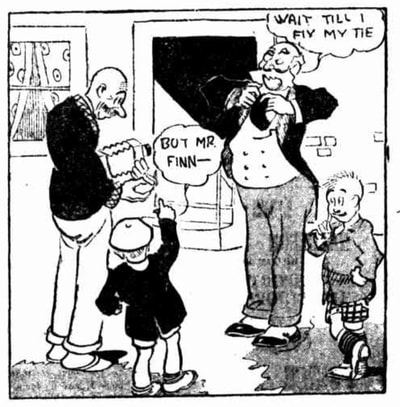 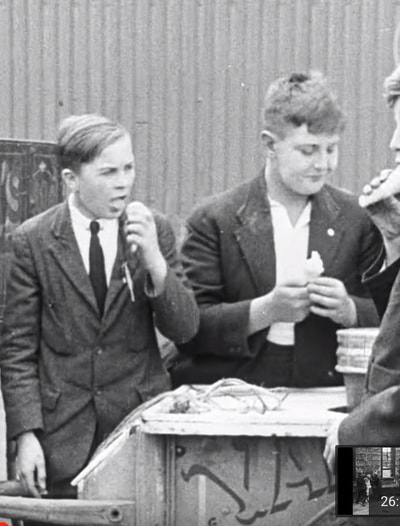 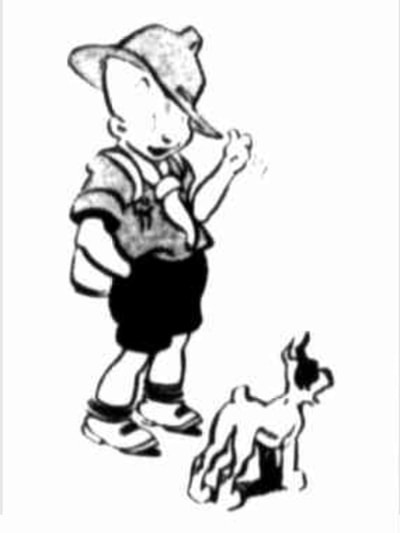