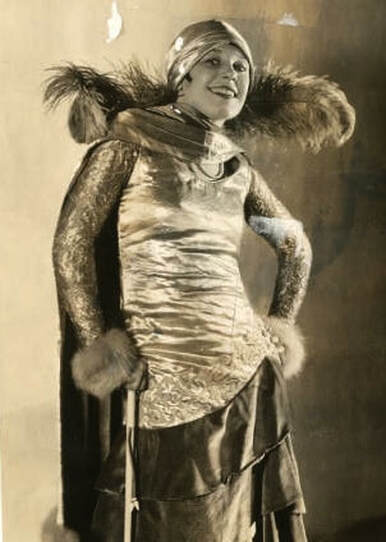 'Little Fifi' in the new, not-so-little guise of a modern flapper. Source: University of Washington.
1916 proved a challenging year for Pony and Fifi. Pony’s contract with a theatre in Portland, Oregon was abruptly terminated in March, leaving her company broke and stranded. The matter went to court, and the company, which had now dwindled to seven members and would soon shrink further, were awarded nearly $100 in unpaid salary.

Pony moved on to even less cerebral fare than ‘The Jolly Tars’ with what would be the company’s final show, ‘Pony Moore and Her Five Dancing Dolls’. Initially, the act was the highlight of ‘Photoville’, a short-lived combined vaudeville-motion picture double bill circuit operating in Oregon and Washington. Finding it difficult to procure trained dancers, Pony and her daughter were reduced to a double act, ‘Fifi and Moore’. Living a hand-to-mouth existence in Seattle, it is ironic that this is probably the period Yvonne later remembered as the most stable of her young life, and the only one in which she received a proper education. 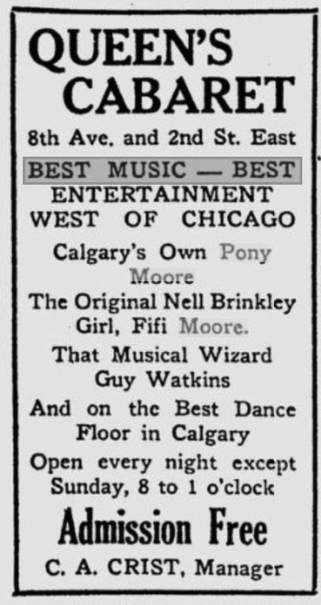 Source: Calgary Daily Herald, 21 July 1917.
The pair's subsequent movements are a mystery, and it is not until nearly a year later that they re-emerge as the headline act at the newly opened Queen’s Cabaret in Calgary, Canada. Yvonne is now credited as ‘the original Nell Brinkley girl', referring to the artist whose drawings of carefree, fashionable proto-flappers were characteristic of the age. Yvonne was certainly not the original - nor was the most famous holder of that title, Ziegfeld Follies girl turned silent film star Mae Murray - but the sobriquet alone is an indication that fourteen-year-old Yvonne’s stage persona had undergone a transformation: no longer that of an adorably precocious child, but a sophisticated girl-about-town.

​The Calgary engagement proved to be one of Pony Moore’s last professional appearances, coming not long before the finalisation of her divorce from Davey Jamieson in August 1917. Yvonne, now approaching the age at which Pony herself had already become a mother, was elevated to the status of family breadwinner, which she appears to have held for the rest of Pony’s life.

While Yvonne’s next confirmed stage appearance does not occur until 1919, there is good reason to believe that she spent much of 1918 in pursuit of a new goal: an entry to the world of legitimate theatre. As always, Yvonne’s own account of this period varied from telling to telling, but a number of details remained constant: she claimed to have become involved with the San Francisco-based Alcazar company, appearing alongside impresario Oliver Morosco’s protege, Charlotte Greenwood. According to Yvonne, this engagement brought her to the personal attention of Morosco himself, who selected her to play the title role in the Canadian touring production of his hit musical Peg O’ My Heart, a role she ultimately played over 300 times.
​
As it happens, Greenwood and company were indeed touring Portland and Seattle with So Long, Letty in late 1917. Though there was no room for a local in the main cast, widely promoted as being unchanged from the play’s New York season, there may well have been a small opportunity for an ambitious local in the play’s ‘beauty ballet’, a suggestion corroborated by Yvonne’s report that she had been the production’s ‘leading dancer’32. Abandoning a high-profile career in burlesque to pursue a tiny part in a more highbrow production remains consistent with Yvonne’s lifelong aspiration towards more serious fare.

We know a great deal about the casting of the various regional productions of Peg O’ My Heart, as it was the subject of a lawsuit between Morosco and his leading lady, Laurette Taylor, who had originated the role, and her husband, the play’s author J. Hartley Manners. The name of Fifi Moore figures nowhere in these negotiations. 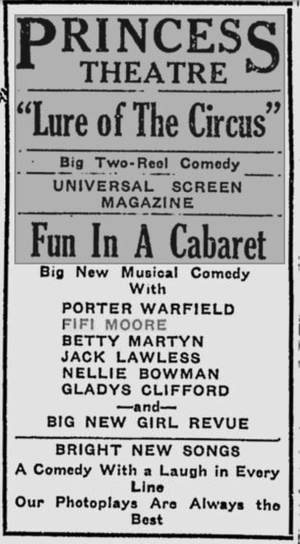 Source: Calgary Daily Herald - 2 May 1919
There is, however, good reason to believe that she played a small role in the United Producing Company’s production of Peg O’ My Heart, which toured Canada in 1918 with Taylor’s understudy, Belva Morell, in the lead role: the presence of Edouard Raoul de Tisne, a rising star of the local theatre scene. Known usually as Eddie or Edward, de Tisne was praised for his versatility on stage and his geniality off.

Described as a Frenchman by parentage, some accounts claimed he was a native of New York, where his mother was the proprietress of a French language school. Others described him as a natural born Canadian. He too claimed to have debuted on the stage as a child; in his case, as an extra in L’Aigion, starring Sarah Bernhardt. It is likely that De Tisne indulged in as much manipulation of his biography as any other performer of his day. There is, for example, nothing in official records to substantiate his claim to have spent a long period with the Royal Canadian Airforce during World War I.

By January 1919, Fifi was a full-fledged member of de Tisne’s repertory, the Calgary-based Princess Musical Comedy Company, and receiving growing acclaim in a series of light comedies. As a legitimate actress, she was now on her way.

The Return of Will Banvard 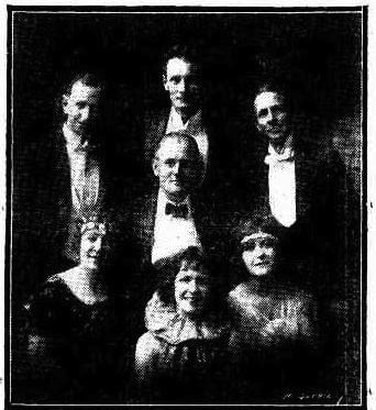 Will Banvard (centre), during the period of his brief partnership with comedian Con Moreni. Source: Daily Telegraph (Tasmania), 23 September 1922.
Eddie was not the only important man to come into Yvonne’s life during this period. The other was someone she had not met in many years, if ever. Will Banvard and his wife Ruby spent Yvonne’s childhood touring America, England and India, where Will’s brother Wally had established himself as a theatrical manager and bookmaker. More recently, Will and Wally had set themselves up as impresarios. The inaccurately named Banvard All-American Comedy Company made its debut in 1918.

When Will Banvard returned to America in mid-1919, he was on the search for new talent, the intention being to split the successful company into two touring components - one to be managed by Will and taken to Australia; and the other - still more confusingly named the Banvard London Musical Comedy Company - to be managed by Wally and to cover England and the Far East.

Yvonne always maintained that the initial plan was to join Wally’s show in India, before it was decided - either before or after her arrival - that Australia’s booming theatre scene would be a better prospect. In fact, a more esoteric complication may have kept Yvonne away from India. In May 1920, her Uncle Wally went missing, an alarming but not uncommon situation when working in places where communication is piecemeal at best. A number of rumours circulated about his whereabouts. Some claimed that he was in Rangoon, Burma. Others declared he had contracted a serious illness while on tour, and was en route to London for treatment. Whatever the case, Wally did not reappear for some months, resulting in a long hiatus in the usually busy activities of Banvard’s Indian touring company.

This period of confusion would have made sailing for Australia the only logical course of action in the short term. Yvonne and her father arrived in Sydney aboard the Ventura on 13 July 1920, Yvonne travelling as ‘Miss F. Horley’. Eddie de Tisne was following very closely behind. Four months later, he and Yvonne were married in Victoria.