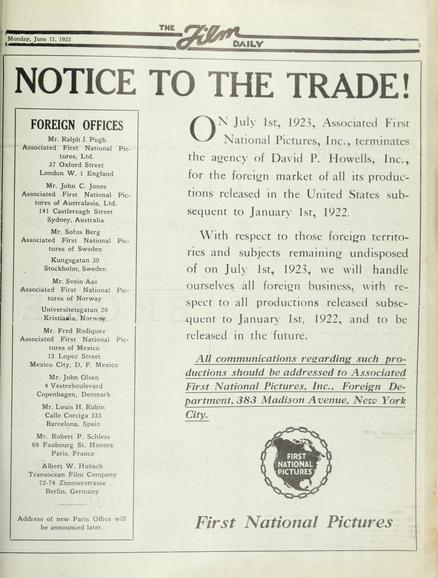 Company news for September 1923 announced the registration of a new company in New South Wales, to be known as Premier National Pictures (Australasia) Limited. Registered with capital of £10,000, its remit was described as ‘to manufacture, buy, or otherwise acquire, sell or lease or otherwise dispose of, and generally trade and deal in moving picture films, etc’.

Director John C. Jones already had a long association with the film industry in Australia. Aside from working in distribution, he had helped produce at least two early films in conjunction with Stanley Crick (later head of Twentieth Century-Fox in Australia), and J.D. Williams - the mogul who, upon his return to his native America in 1916, founded First National Pictures.

Jones was therefore an ideal fit to lead Premier, which was chiefly created as an Australian distributor for First National, and would be renamed First National (Australasia) in 1924. First National had recently undergone a major re-organisation, which included entering film production after a fraught period of rivalry with Paramount Pictures. Now, it sought to assume control of its foreign distribution, sending Harry J. Morgan to Australia in early 1923 to organise the particulars.

It is not known whether other regional offices for First National showed a similar interest in the ‘manufacture’ of films. Film production had slowed in Australia during the early 1920s, and what was lost in quantity was not always made up in quality. Continuity in production was nearly nonexistent; independent companies frequently came into being, made one or two films, and folded. The powerful Union Theatres exhibition chain made moves to buck this trend with the establishment of a dedicated studio at Bondi Junction and an ambitious slate of its own Australian-made films, produced under the banner of ‘Union Master Pictures’.

Undeterred by a national uproar over the censorship of First National’s jazz-age drama Flaming Youth (1924) - or perhaps even emboldened by the amount of publicity this had created - the first Union Master Picture was a Flaming Youth-style flapper comedy, Painted Daughters (1925). Premier/First National may have instead looked to another of their own attractions for inspiration for their inaugural feature - Jackie Coogan, the precocious child star of Charlie Chaplin’s The Kid (1921), whose Circus Days (1924) had been a less controversial success for the company.

Union Master Pictures publicised their production with a highly visible national talent competition, conducted by the Australian born Hollywood star Louise Lovely. Premier/First National appears to have instead opted to base their production on a known property - Those Terrible Twins.

It is likely that the company were prompted by the growing concerns of local producers that foreign-owned distributors, dealing chiefly with the dominant Hoyts and Union Theatres, represented a 'combine', shutting out Australian and British films in favour of cheaper American productions. To fund and release a local film was a relatively inexpensive goodwill gesture on First National's part. Indeed, it was later revealed that the picture had cost only £500 to produce, at a time where a comparable product - The Far Paradise (1928), made in Australia by the independent McDonagh sisters - was considered extremely thrifty at £1,000.
​
The promotion of the production and the inclusion of one (and possibly two) of its comic characters suggests that the Evening News/Sunday News may have initially planned to take a financial stake in Those Terrible Twins, or at least lend their support. Any such plan must have dissolved before the release of the film, and their lack of support may possibly answer the question of why Those Terrible Twins became Ginger Meggs and Bluey - of which more later. 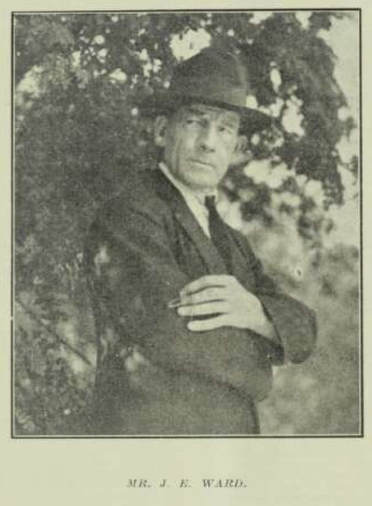 Director J.E. Ward. Source: Everyones, 29 July 1925
J.E. WARD - THE BALMAIN BIRDMAN
​
The sixtysomething Jack Ward seemed a curious choice as the film’s director. Ward had trained as a painter and lithographer in his native England, and established a name for himself as an illustrator after immigrating to Australia in 1882.

The young man settled in Queensland, where he gained work on a number of publications including the Brisbane Telegraph and The Queenslander, adopting the popular subject matter of his new home - bushland scenes and sentimental narratives about country courtships, settlers, drovers and bushrangers. Another of his early interests was amateur phonography, an unusual hobby at a time when owning a phonograph player, much less a recording device, was quite uncommon.

In 1905, Ward moved to New Zealand to become chief artist on the New Zealand Graphic - and perhaps also to indulge a pastime that gradually became a consuming obsession: ornithography. As the Premier National Pictures’s screenwriting competition was announced, Ward had just arrived home from his latest tour of Papua New Guinea. Since 1916, he had visited the country regularly, initially with the romantic notion of discovering the Blue Bird of Paradise, but later to help procure rare native birds for zoos in Australia and America, and for his own breeding purposes. 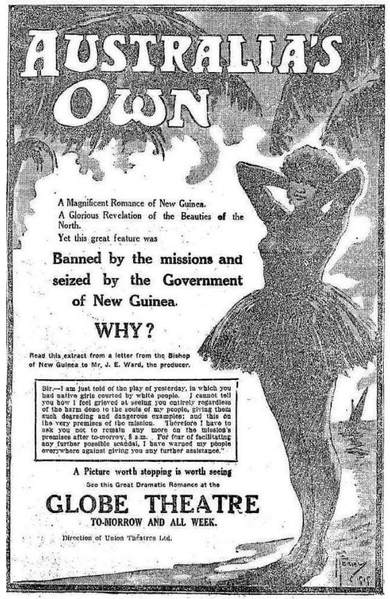 Advertisement for J.E. Ward’s Australia’s Own (1919). The film, which is now mostly lost, was not nearly as salacious as advertisements imply (Sunday Times (Sydney) - 19 January 1919.
His abiding interest in Papua New Guinea spawned at least two other short films, The Quest for the Blue Bird (1923) and Death Devils in a Papuan Paradise (1924), neither of which appear to have received wide distribution. With the addition of a dramatic plot about a romance between a young woman and an Anzac, Ward’s anthropological and nature footage formed the basis for Australia’s Own (1919), his only other known feature film, in which Ward himself played the German villain. A passing reference to a business visit to America in 1921 suggests that he may have attempted to interest the American trade in the film, apparently without success.

Local reviews made clear that the scenery and not the story remained the highlight of Australia’s Own, and after dealing with suspicious natives, hostile missionaries and the ire of the local government, Ward might have been quite thankful to return to return to his birds, which he was, for the time being, content to capture in a series of exquisite watercolours and oil paintings.
​
Was it a fellow black-and-white artist who suggested Ward to head the film? It is one possible explanation for handing a sixty year old bird fancier such a large and atypical project. It can have been no coincidence that Ward left for his next journey overseas not long after finishing work on Those Terrible Twins.  Much of the film's £500 budget likely went towards paying Ward - a pittance for a director, but a sizeable injection of funds for an ornithological expedition.

What is clear is that Ward brought a certain cinema verité to his subject. He was not interested in a prettified or romanticised vision of urban Sydney, but shot what he saw, with the same unsophisticated documentary realism he brought to his films on more exotic topics.