The most obvious question about Those Terrible Twins is the most mysterious of all. How did a film that was clearly based on a different property become a film about Ginger Meggs?

Many factors suggest that the change was made after production was complete - most notably, the lack of any attempt to replicate the characters or situations of Us Fellers. The Sydney Morning Herald also pointed out that the name of the film’s villain, ‘Spike Malone’, had probably been borrowed from another recent film, Manhattan (1924), released in Sydney in late March 1925. Given that production of Those Terrible Twins is likely to have been completed in late February, it could be that this name was hastily adopted during a period of retooling that also turned the Twins into Ginger and Bluey.
​
But who made this decision, and why? 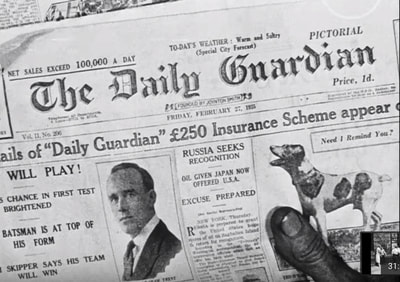 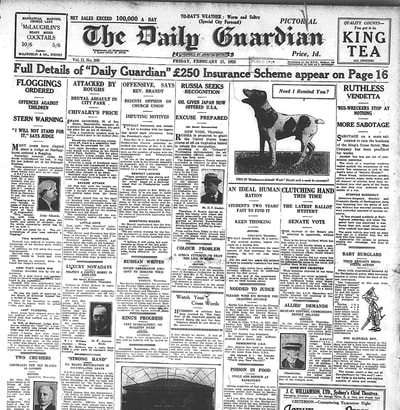 NEWSPAPER TANGLES
​
A clue to the tangle may exist in the web of different newspapers with a stake in Those Terrible Twins.

It must be remembered that comic strips were primarily designed to sell newspapers and raise circulation. Those Terrible Twins and Fatty Finn came from the Sunday News, but it was a rival publication, the Sunday Sun, whose most popular comic character ultimately featured in the film. And yet it is a third rival, the Daily Guardian, whose masthead appears on a newspaper insert in the finished film. Like the many banners for Withrow’s School of Physical Culture that are seen throughout the gymnasium sequence, this appears too prominently to be dismissed as a coincidence.

The Daily Guardian and its weekend counterpart, the Sunday Guardian, were newcomers to the Sydney newspaper scene, launching on 2 July 1923 under the control of Robert Clyde Packer, patriarch of one of Australia’s most significant media empires, and James Joynton Smith, proprietor of the popular Smith’s Weekly. The Guardian was considered a rougher and readier rival to the Evening News and oh-so-serious Sydney Morning Herald.
​
It is curious that the Daily Guardian would permit the use of its masthead in a film that began as a promotion for one rival, and ended as a promotion for another. Or, to look at it another way, it is curious that the Evening News and then the Sun might have permitted such cheeky onscreen publicity for an upstart opponent. Did the Evening News withdraw the rights to its paper’s comic characters as a result, necessitating the change to Ginger and Bluey? A plausible theory - but a theory only.
​ 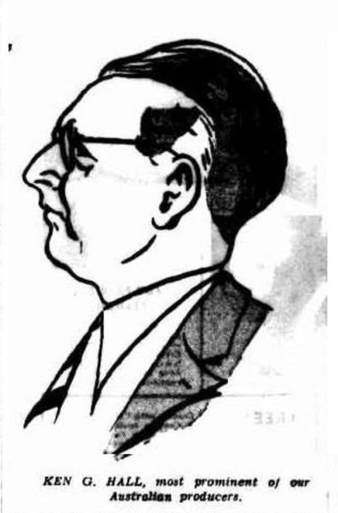 Ken. G. Hall in a 1939 caricature by Kerwin Maegraith. Source: Sydney Morning Herald, 11 September 1939.
A KEN G. HALL CONNECTION?
​
One intriguing possibility is the involvement of Ken G. Hall. Later Australia’s most prolific film director of the 1930s, Hall was then one of the top publicity men in the country. By the time he joined First National in 1924, the 23 year old had already had a glittering career. Entering film publicity after a period as a cadet reporter on the Evening News, he rose to Head of Publicity of the powerful Union Theatres chain before his 21st birthday.

Hall’s move to First National included a visit to the company’s studios in New York and Hollywood, where he was wined and dined by film star Colleen Moore and her husband John McCormick, the company’s Head of Production. Gayne Dexter, Hall’s mentor at Union Theatres, would shortly be appointed Head of Publicity for the entire international First National organisation.

Hall spent much of his time at First National as a ‘fixer’ - judiciously editing films that were likely to be snubbed by the conservative Commonwealth Censor, Cresswell O’Reilly, writing adaptations of current hits to be sold cheaply on news-stands, and tweaking publicity to make even the least attractive film seem like a must-see hit.
​
It was First National’s John C. Jones who gave Hall his first opportunity in production, commissioning him to shoot a significant amount of new material in order to transform what was considered an unsellable Bavarian naval film, Unsere Emden, into the popular Exploits of the Emden (1928), hyped as ‘The Picture Every Australian Owes It To Himself To See.’ 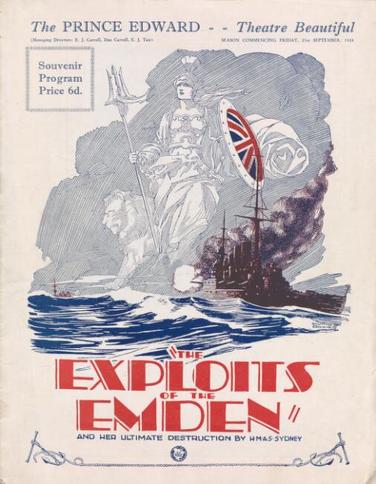 Program for Exploits of the Emden (1928). The additional sequences added to the extant film Unsere Emden represented Ken G. Hall’s filmmaking debut. Source: National Library of Australia.
By their own admission, First National had sunk £500 into Those Terrible Twins. It can be inferred that they were neither pleased by the results, nor confident of its commercial prospects. Rescuing a project such as this would have been entirely within Hall’s wheelhouse.

On one hand, Hall had long standing associations with a number of figures connected to the Daily Guardian. Future media mogul Frank Packer, the son of Daily Guardian proprietor Robert Clyde Packer, was then a cadet on his father’s newspaper and became a longtime associate of Hall, whom he later employed as the inaugural head of his TCN-9 television station. The Daily Guardian’s editor, Eric Baume, was another friend who would later perform a number of behind-the-scenes roles at Hall’s Cinesound Productions during the 1930s.

But the most significant of Hall’s possible connections to Those Terrible Twins was none other than Jim Bancks, creator of Ginger Meggs, and the man Hall was to describe as his best friend.

At the time of the film’s production, Bancks had just returned to Sydney after a busy stint in Melbourne, where he worked on the short-lived Evening Sun. Now, he decided to dedicate himself wholly to writing and promoting the lucrative Us Fellers. Amongst his new ventures was the first Ginger Meggs Annual, which arrived in time for Christmas 1924. Hall might have been just the man to convince his friend that lending the Ginger Meggs name to a film might be an attractive promotional proposition - or alternatively, to ask him to grant the rights in order to help First National out of a bind.

If Hall was not involved in this first attempt to bring Ginger Meggs to the screen, he was certainly involved in the second. By the early 1930s, he had been placed in charge of Cinesound Productions, the production arm of the former Union Theatres, now known as Greater Union. Animator Eric Porter, who worked at Cinesound, was commissioned to work with Bancks on a short cartoon version of Ginger Meggs. The funding for this project was provided by none other than his close friend Frank Packer, who had since risen to the top of his father’s newspaper empire, and would shortly ask Bancks to become the godfather of his first son, Clyde Packer.

Could the friendship between Packer, Bancks and Hall resolve the question of how Ginger Meggs ousted the Twins - and also explain why the Daily Guardian makes an appearance? Perhaps further research will tell - or perhaps we will never know.
​
However it came about, the addition of the popular character appears to have done little to attract larger audiences to Those Terrible Twins - perhaps due to the fact that it was so obviously based on a completely different story. Eventually, the film received little publicity, suggesting that First National concluded that all of their promotional might - even that of the formidable Ken Hall - was not enough to rescue it.