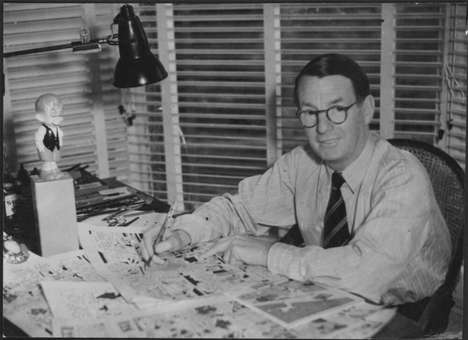 Artist Jim Bancks. Source: Australian Information Service via National Library of Australia.
First National (Australasia) virtually disowned Those Terrible Twins after its release. Speaking to the Royal Commission into the moving picture industry in Australia in 1927, company head John C. Jones commented that his company would be more than happy to handle Australian productions, provided that they were ‘up to standard’ - which, in his opinion, was impossible without bringing technicians from America to train the less experienced Australians. He would not even admit to funding the production of Those Terrible Twins, describing it bluntly as 'a terrible picture'. It is possible that the company's main - if not sole - purpose in fostering its production was to avoid the very charges of anti-competitive behaviour that the Royal Commission sought to investigate.

Aside from Exploits of the Emden, the Australian arm of First National are not known to have made any further attempts to produce Australian films, though they did contribute to a British production, The Only Way (1925) - possibly at the behest of company head John C. Jones’ old business partner, J.D. Williams, who had recently become head of British National Pictures. Clearly, Those Terrible Twins was an experiment they were not keen to repeat.

The Depression brought the newspaper boom to a swift end, and the Daily Guardian, Evening News and Sunday News were purchased by the owners of the Daily Telegraph and discontinued, Fatty Finn moving to the Sunday Sun to take a place next to his former arch rival, Us Fellers, under the editorship of former Daily Guardian head scribe Eric Baume, who himself became close to Bancks during the 1930s.

Us Fellers was finally retitled Ginger Meggs in 1939, and continued to bring Jim Bancks international fame and admiration until his death of a heart attack in 1952. The strip is still in publication today under its fifth artist. Fatty Finn was wound up upon the death of its creator, Syd Nicholls, in 1977. Having already inspired the silent film The Kid Stakes in 1927, Fatty Finn was again adapted for film in 1980, while Ginger Meggs had to wait until 1982 for his true live-action film debut.

Just as the strip was hitting its stride, Those Terrible Twins was discontinued, not much more than a year after it had begun. This was hardly unusual - in its early years, the pages of Sunbeams were full of similarly short-lived clones of the evergreen Us Fellers, including WEP’sThe Trifling Triplets, Win Frye’s The Coo Coos, and Harry Eyre’s Micko and His Monk. Cyril Samuels soon moved on to other comic strips including Poor Pa and Oozy Woozy and the Kids, which lasted into the 1940s and was eventually transferred to the Sun to appear alongside Fatty Finn and Ginger Meggs. Though narratively it was more along the lines of Samuels' earlier Curly Hair and the Dear Little Bear, his art style was by now considerably more refined, bearing only traces of the lovable anarchy of earlier days.
​
During the later 1930s, Samuels began to supplement his cartoon work with scriptwriting, authoring the historical stage operetta ‘The Silver Swan’ and a number of radio dramas. He was also a regular contributor to newspaper poetry columns. During the run of Those Terrible Twins, he had published The Big Game in Australia (1924), a humorous retelling of the 1924 English cricket tour. A second book, Australia’s Story Told in Pictures, appeared in 1937. With the advent of World War II, he became highly involved in war work, and eventually spent many years as an official of the Australian War Memorial. Like too many of Australia’s talented black-and-white artists, his art remains virtually unknown today. 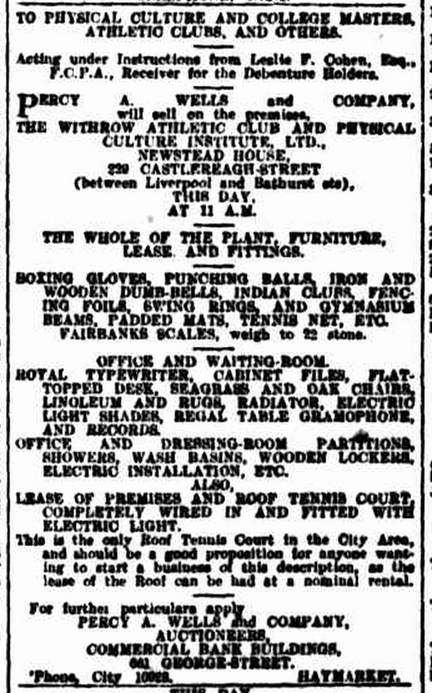 Source: Sydney Morning Herald, 4 August 1925
Walter Withrow’s School of Physical Culture on Castlereagh Street foundered not long after the filming of Those Terrible Twins, and its full contents were sold at auction in August 1925. During the late 1920s, the rooftop tennis court was taken over by the Welsh boxer ‘Slam’ Sullivan and partially converted into a boxing gymnasium.

A new Withrow Institute of Physical Culture was established at Chard House, at 171 William Street, Darlinghurst (a building which still exists). This is probably where Withrow met Elizabeth Chard, the tennis-mad wife of the building’s owner, a wealthy wool merchant. She and Withrow were married in 1930, a year after her husbands’ death, and spent their honeymoon in America and Canada.

During the Depression, Chard House became better known as the home of the ‘Fifty Fifty Club’, a notorious sly-grog shop. Withrow finally gave up his fitness empire in about 1938, and began working for a neighbouring business, REO Motors. By the time of his wife’s death in 1945, he was described simply as a ‘city businessman’. Chard House was purchased by the ABC at around the same time, and transformed into a radio studio. Withrow died in 1975 at the age of 92, survived by his second wife Florence.

To the best of anyone’s knowledge, J.E. Ward never attempted to make another feature film, though he took part in a 1925 deputation to the Federal Customs and Trade Minister, protesting what local producers claimed was a bias amongst exhibitors against the showing of Australian films. A year after completing work on Those Terrible Twins, he was on a ship to San Francisco to continue his bird-hunting. He spent the last four decades of his life at ‘Shannon Grove’, building up an aviary of exotic birds and also maintaining a fish hatchery in his garden. He died in 1955 at the age of 90. According to his family, he spent his last days as 'a bitterly disappointed man’, having failed to sell a trove of paintings of his beloved New Guinea that he had amassed during his long lifetime.

Those Terrible Twins is not an original film, taking obvious inspiration from American slapstick comedies - but nor is it a terrible one, its rawness forming part of its appeal. Even as it exists, is an entertaining document of its time, the performances of its young cast are enthusiastic and authentic, the titles are rich in the Australian slang, and the production overall is enjoyable enough to lament that it has not survived in full.

Two years after Those Terrible Twins, came and went, a new Australian film made its premiere, The Kid Stakes (1927). Like the earlier film, it was based on a popular comic strip - the Terrible Twins' former Sunday News stablemate Fatty Finn, who had since evolved from chubby prankster to all-Australian everyboy. Again, it featured a grittily authentic urban backdrop, intertitles laden with humorous children's slang, and even a dialect-speaking Italian character. This time, the participation of the Sunday News newspaper was loudly trumpeted, as was the co-operation of Fatty Finn's creator, Syd Nicholls, a longtime professional associate of Cyril Samuels. Though The Kid Stakes is undoubtedly the more successfully achieved production, it is plausible - even probable - that Those Terrible Twins, the first Australian film based on a local comic strip, played a part in inspiring the later film.

Even in its extant form, Those Terrible Twins is full of interest - and many mysteries that are likely to remain unsolved.