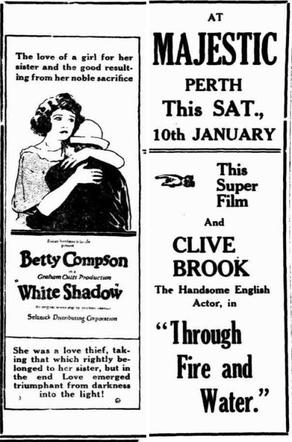 Advertisement for 'The White Shadow' (1923). Source: The Mirror (Perth), 10 January 1925.
This essay was my contribution to the 2012 For The Love of Film Blogathon to benefit the National Film Preservation Foundation and their restoration of surviving footage from Graham Cutts' The White Shadow (1923), also Alfred Hitchcock's first credited screen work.

The White Shadow (1923) tells the tale of two sisters - one virtuous, one vampish - both of whom are played by Betty Compson. Reviews were near unanimous in their praise of Compson’s ability to pull off the difficult task of playing two very different characters.

The idea of a dual role is not so common today, but in the silent era it was the novelty du jour, dating back at least as early as 1914’s La Belle Russe. For audiences, there was the excitement of ‘special effects’; for the screenwriter, a unique psychological twist to an otherwise mundane story. For the star, there was an opportunity for a virtuoso performance - or performances.

Mary Pickford played some of the most famous silent dual roles. In Stella Maris (1919), playing both the beautiful but crippled title character and the timid, plain orphan Unity Blake, she achieved the latter so effectively that audiences wondered why Mary had let a talented unknown steal the show.  In Little Lord Fauntleroy (1921) she went one better, performing as the pre-adolescent male title character and his mother.

In this film’s most famous scene, mother-Mary leans over and kisses son-Mary on the cheek, a shot that was achieved by the careful use of matte effects. Director and special effects whiz Norman Dawn, who developed this technique, was the creator of a similar shot with Dorothy Phillips in The Right To Happiness (1919). 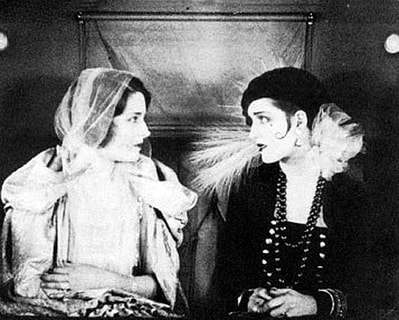 Norma Shearer meets Norma Shearer in 'Lady of the Night' (1925).
Frequently - and as in The White Shadow - filmic twins represent opposite aspects of the human character: one good, one evil; one pretty and one plain; one rich and one poor; one sickly and weak, one strong and healthy, and so forth. Some stories take this to a highly allegorical level. In The Wheel of Chance (1928), Richard Barthelmes plays twin brothers, one redheaded, one black haired. It’s no coincidence that these are also the colours of the roulette wheel. Whenever red wins, black must inevitably fail, and so it is for these two fated brothers. Just to add an additional layer of drama, many silent era twins are long-lost or even previously unknown siblings. In 1919’s The Ordeal of Rosetta, Alice Brady plays an Italian office girl who commits suicide over an unhappy love affair. She is avenged by her twin sister Lola, long since presumed dead in an earthquake.

Sometimes, the twin is not even a relation at all, but a startlingly close lookalike. In Dorothy Arzner’s directorial debut, Fashions for Women (1927), Esther Ralston, as a flighty fashion model, is pitted against Esther Ralston, as a more mild-mannered double who is hired by her long-suffering press secretary, played by Raymond Hatton. Norma Shearer also plays lookalikes in Lady of the Night (1925), one of the most effective 'twin’ films. One Norma is the daughter of a crook, who seems destined to follow her father into a life of depravity. The other is the virtuous daughter of the judge who convicted him. The two are brought together by the love of the same man. One will have to make a sacrifice, but which? For anyone who has only seen Norma in her syrupy roles of the later 1930s, her performance here is nothing short of revelatory.

The theme of mistaken identity inevitably lends itself to crime stories, so it is no surprise that twins feature highly. For The Term of His Natural Life (1927) and Not Guilty (1921) are both tales of innocent men who have taken the blame for a crime committed by an identical brother. 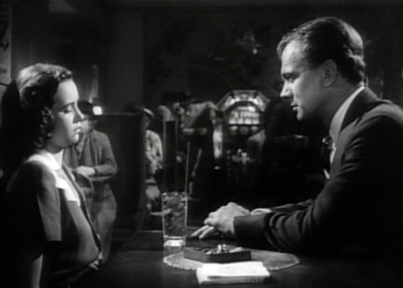 Teresa Wright and Joseph Cotten in 'Shadow of a Doubt' (1943). Source: Wikimedia Commons.
It is this last theme that Alfred Hitchcock clearly found most appealing. Doubles, doppelgangers and metaphorical twins appear many times in his films, most famously in North by Northwest (1959), but most effectively in Shadow of a Doubt (1943), the film Hitchcock himself described as his personal favourite.

“Well, Charlie? You think you know something, don’t you?” says Uncle Charlie to his identically-named niece in that film. “Now look, Charlie, something’s come between us. I don’t want that to happen. Why, we’re old friends. More than that. We’re like twins. You said so yourself.”

But it so happens that the younger Charlie has begun to suspect that her uncle is really a serial killer. To Hitchcock, the most frightening twin of all is the one that dwells in oneself, as the disregarded darker side of a seemingly spotless nature.
​
Hitchcock was still exploring the idea of doubles in his last great film, 1972’s Frenzy. Although he only worked on The White Shadow in an assisting capacity, its central theme continued to resonate with him for half a century afterwards.