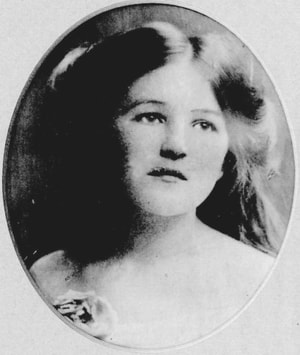 Margaret Higgins. Source: Family photograph.
Margaret Higgins, born in 1891, was the eldest of eight children, an Australian girl with a strong Irish ancestry. Her diary for the year of 1916 has been preserved by her family. This was no ordinary year. Two of her brothers had just set off to fight in World War I, and were currently training in Egypt for deployment to the Western Front. Who knew if she would ever see them again?
​
At the time of writing her diary, 25 year old Margaret had already been in the workforce for ten years, initially at a laundry in Glebe, and later as a clerk and book-keeper at the large Grace Bros department store at nearby Broadway. It was here that she met her future husband, Fred Wilkins. She now worked with Fred and his brother Syd at their brush and washboard factory in Leichhardt. 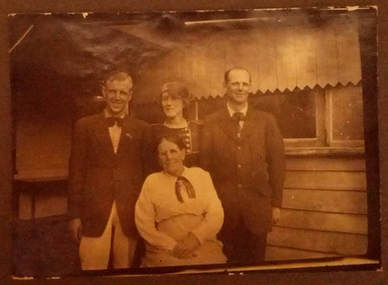 Fred, Margaret, Syd and Fred's mother in 1919. Source: Family photo.
Margaret grew up in a world that was changing rapidly. New technology also meant new kinds of affordable entertainment for the working class. ​Aside from waiting anxiously for word from her brothers, Margaret spent her year hard at work, making visits with friends, and attending church which, as a devout Catholic, she did without fail.

As 1916 dawned, Margaret was living with her family in a small terrace house in the working class suburb of Glebe, in inner Sydney. Like many girls of her station, she worked to support her family, but in her leisure time, she enjoyed singing and dancing, and secretly dreamed of a career on the stage or screen. Those who knew her frequently made reference to her cheerful and outgoing personality.

Of all entertainments, Margaret's favourite was to attend the movies. She was a prodigious filmgoer, often attending screenings several times a week. Each film she saw during 1916 was meticulously recorded in her diary, sometimes along with some brief impressions. ​​Many of the films she watched remain famous to this day. Others are long since lost, and it is only through reviews and other accounts that we can piece them together.

Margaret’s diary gives us an invaluable insight on the habits of the typical Australian girl during one of the most turbulent years in the nation's history.