Australians In The Movies 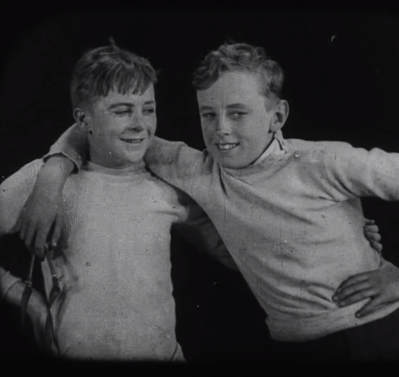 Those Terrible Twins, as they appear in the opening moments of the film.
In July 1925, a new Australian-made film made its debut. Advertisements truncated its rather unwieldy official title, Those Terrible Twins, Ginger Meggs and Bluey, and were cagey about its subject matter. Directed by J.E. Ward, it received minimal publicity in Sydney and little more in Brisbane, where it appeared in August that year. After a handful of showings in regional Australia, it disappeared and was largely forgotten.

To coincide with an exhibition on the iconic comic strip hero Ginger Meggs, the Australian National Film and Sound Archives released most of the extant footage of Those Terrible Twins, the only silent film to feature  ‘Australia’s Favourite Boy’. It was news to me that anything survived of this intriguing production.

Those Terrible Twins is an orphan film, and much about the production remains a mystery, including the identities of its cast and crew. Who instigated the film? Who funded it? For fans of the red-headed larrikin, one question is the most obvious of all: since when did Ginger Meggs have a twin?
​
In seeking answers to these questions, some surprising discoveries have already been made - including the fact that the ‘Ginger Meggs’ movie is not truly a Ginger Meggs movie at all.

This series of articles attempts to answer some of these questions, and make intelligent guesses about the ones that remain.