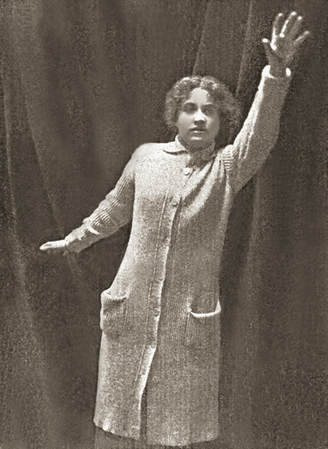 Actress Dorothy Gibson models the jacket she was wearing when the ship went down, during promotions for 'Saved From The Titanic' (1912). Source: Wikimedia Commons.
Written to commemorate the centenary of the sinking of the Titanic.
​
The story of the RMS Titanic has been told on film dozens of times since its dramatic sinking. No less than three films emerged in 1912 alone, less than a year after the tragedy took place. A newsreel which included dramatic re-enactments of some eyewitness reports reached screens a week later, and caused a sensation. The footage looked authentic, but in reality much of it had been taken aboard the nearly identical sister ship, the RMS Olympic, which had sailed its maiden voyage less than a year earlier.
​
The first narrative film about the disaster was not far behind, released a mere month after the sinking. The film was Saved From the Titanic (1912) - and its star, Dorothy Gibson, had actually been aboard the stricken vessel when it went down.

Gibson had begun her career as a stage actress, a protégé of theatrical impresario Charles Frohman. Frohman was an astute judge of talent - Billie Burke, Ethel Barrymore and John Drew were amongst the future stars he discovered. Dorothy made the transition to films in 1911, one of the very first movie actresses actively promoted as a `star’.

She was aboard the Titanic in order to fulfil a film engagement in New York after a short holiday in Italy. The Eclair Film Company must have quickly realised the potential of having her commit her story to film, as a script - co-written by Gibson herself - was quickly prepared, shot in a week, and the movie released less than a month later. For added authenticity, she wore the actual clothes she had been wearing when she had left the ship.

Though Saved From The Titanic proved to be a great success, it was not without controversy. It was not seen as fitting to turn a tragedy into entertainment and profit. It also proved to be Gibson’s last film. Probably suffering from delayed shock, which cannot have been helped by re-living such traumatic events for the benefit of the camera, she suffered a nervous breakdown. Only one of her films survives today, Saved From The Titanic having been destroyed in a studio fire only two years after its production.

By startling coincidence, Charles Frohman perished in 1915 in another famous maritime tragedy: the sinking of the RMS Lusitania. His brother and business manager, Daniel Frohman, had helped to found the Famous Players Film Company, one of the first and greatest of all the early film corporations.