Australians in the Movies 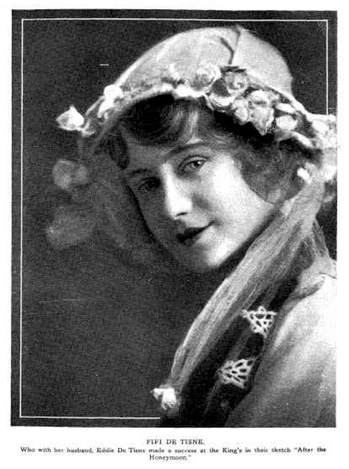 Fifi de Tisne - aka Yvonne Banvard - masquerading under one of the six (!) names she would be known during her life. Source: The Critic (Adelaide), 3 May 1922.
When Australian actress Yvonne Banvard died, the Los Angeles Times was amongst the publications to name her a 'former Mack Sennett Bathing Beauty'. This research project began as a simple attempt to answer the question: was she?

It is no spoiler to say that the answer is almost certainly no.  Until now, nothing close to the real story of Yvonne’s early life has ever been told.

Emerging from careful examination of surviving programs, theatrical magazines, news publications and shipping records across several continents, it is a multi-generational story both more interesting and more human than the myth that she wove in its place, and one that reveals much about the conditions faced by an itinerant performer in the early 20th century. 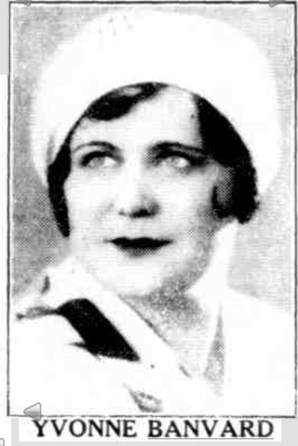 Yvonne Banvard, not long after making her first - and probably only - movie, 'Strike Me Lucky' (1934). Source: The Mirror (Perth) - 14 December 1935.
She is American-born Miss Fifi Banvard, whose theatrical career began at the age of four. She was then playing the child in the opera "La Boheme" in New York. At the age of seven she was touring with her parents, "The Flying Banvards," through the East ... At 12 she was studying ballet dancing in America with Pavlova's Russians, and about two years later broke into musical comedy with Charlotte Greenwood. She was one of the youngest tragediennes in the world at the age of 17, playing the feature role of "Madame X" in New York. Then her movie career began with [Mack] Sennett.
- Hobart Mercury - Saturday 2nd September 1950

The name of Yvonne ‘Fifi’ Banvard is little known today. It is an oversight which deserves to be rectified. By the time of her death in 1962, Banvard had spent half a century on the stage - a decade in America and most of the remainder in Australia, the country which, despite occasional claims to the contrary, was her true place of birth. Her talent was multifaceted and her ambitions vast, culminating in a brave attempt to establish an Australian national theatre at Hobart’s historic Theatre Royal. Artistically triumphant but financially disappointing, it remains one of the country’s outstanding attempts to place Australian legitimate theatre on an international footing.

Yvonne Banvard’s debut as leading lady of Brisbane’s Reynolds-De Tisne repertory company in 1922 marked the arrival of a fully formed entity, the inevitable culmination of a sparkling career on the American stage and screen. At least, this was the accepted story as disseminated by Banvard herself. Such high profile co-stars as Gordon Chater and Hal Porter had little trouble believing it. Even the august Australian Dictionary of Biography dutifully repeated many of her more outlandish claims.

In fact, Yvonne had spent her early years shaping and reshaping herself, as if working through several drafts towards a final persona. Of the first twenty years of her life, almost nothing remained in the final draft.

This tendency to embellish was not uncommon to performers of her generation, who were taught to value a good story above all else. Expatriates and immigrants found the process even simpler, their overseas exploits more difficult to verify. Yvonne’s lifelong nickname, ‘Fifi’, remained the only relic of her early life that she carried into adulthood - indeed, it became central to her personal mythmaking.

Some of the stories Banvard told about herself are easily dealt with. For example, she could not have played the role of Sadie Thompson in Somerset Maughan’s Rain at the age of seventeen, as she often claimed. The play did not debut until 1922, when Banvard was in Australia and aged twenty. Others are less straightforward. While she cannot have been a child student of Anna Pavlova, given that  Pavlova is known to have taken only seven private students during her lifetime, the idea that their paths crossed during Pavlova’s American tours between 1910 and 1915 is plausible, especially given that Banvard had demonstrated aptitude in the style of ballet that only Pavlova and her associates offered at the time.