A 1916 Film Diary Epilogue: The Making of ‘The Murder of Captain Fryatt’ 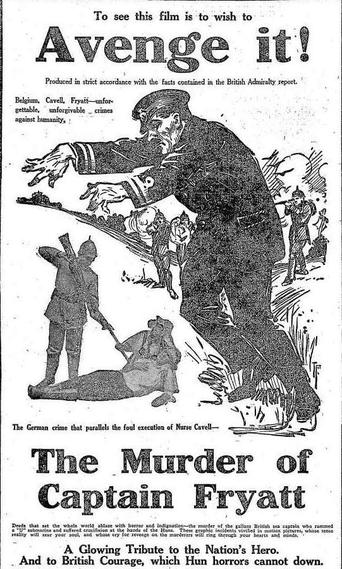 Source: Sunday Times (Sydney), 25 February 1917
Occurring during the period during which Margaret was ‘too busy to enter up’ but still worth recounting is one last film-related incident for the year.

Earlier in 1916, a patriotic Australian film called 'The Martyrdom of Nurse Cavell' (1916) was produced by director Jack Gavin. The story capitalised on public outrage over a notorious wartime act, the 1915 execution of the British nurse Edith Cavell, despite her demonstrated compassion for injured soldiers on both sides of the conflict. The film was a potent piece of anti-German propaganda, and it is no coincidence that the story’s next major onscreen appearance was in late 1939, shortly after the beginning of World War II.

The success of The Martyrdom of Nurse Cavell allowed Gavin to make plans for continuous production, renting a studio in North Sydney and placing a second film, The Murder of Captain Fryatt, into pre-production. The execution of the Captain, who had attempted to ram a German U-Boat, had inspired a similar outcry to that of Nurse Cavell, and Gavin anticipated that its telling would prove just as popular as the earlier film.

“Despite the world-wide horror excited by the cold-blooded butchery of Britain’s mercantile marine hero, Captain Fryatt, the complete details of that judicial murder never yet have been fully told,” boasted advance publicity. “At last, after elaborate and exhaustive research, and from authoritative sources, personal and documentary, those details have been completely pieced. They will be fully unfolded in a motion picture of historic value.”

A number of famous stage actors were engaged, including Elsie Prince, Augustus Neville, Clara Stevenson, Charles Villiers, Harrington Reynolds in the title role, Olive Proctor as his wife, and Jack Gavin himself as the German spy who betrays Fryatt. Gavin’s wife Agnes was the scenarist, and the cinematographer was Franklyn Barrett, also one of Australia’s most prolific and talented early film directors. 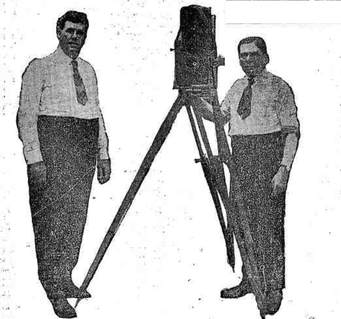 Jack Gavin and Franklyn Barrett. Source: The Mirror (Sydney), 12 January 1917
Jack Gavin encountered some unusual difficulties in bringing The Murder of Captain Fryatt to the screen. The shooting of a relatively innocuous sequence at a neighbourhood store in North Sydney almost prompted a full scale riot. Seeing men in German army uniforms, it did not occur to onlookers that they were not the real thing, and police had to be summoned to protect the actors from being attacked by an angry mob. There was a similar confusion during filming at Darlinghurst Gaol.

Gavin now faced a crisis. Even after demanding and winning a plea for extra pay, many actors in the production now feared for their personal safety, and decided to abandon their roles. There was a desperate search for anyone who was willing to take the risk.
​
It is likely that this was the point at which Margaret’s fiancée, Fred Wilkins, made his first and only known bid at film fame. 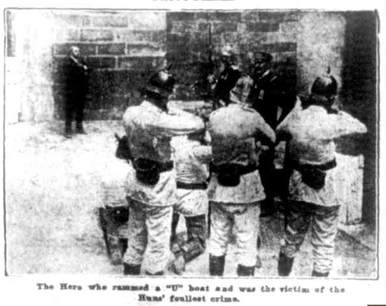 Source: The Evening News (Sydney), 24 February 1917
It is probable that Fred’s scenes were shot some time in late December 1916, or early the following year. The haste at which the film was put together was not unusual for the time, but it is likely that a concern for capitalising on the public mood was given a higher priority than the 'exhaustive research’ claimed by publicity.

Very few stills survive from The Murder of Captain Fryatt, which is a lost film, but assuming that he was in fact one of those who volunteered to don the dreaded uniform of the Hun, it is quite likely that Fred Wilkins is one of the soldiers with his back to us in this picture. 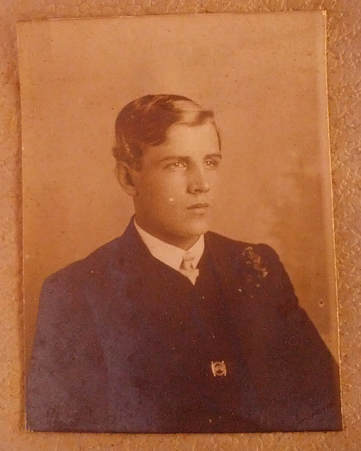 Fred Wilkins in the early 1910s. Source: Family photograph
The four-reel picture was complete and ready for submission to the censor by 7 February the following year. Previews were held shortly afterwards at Sydney’s Piccadilly Theatre and Brisbane’s Pavilion Theatre, before a full release at the Lyric Theatre in Sydney, on February 26th. Advertisements, heavy on anti-German sentiment, attempted to whip audiences into an indignant and patriotic frenzy.

Reviews were overwhelmingly positive. “As an Australian production it is well above the average, and carries the same appeal as did the previous Gavin film, The Martyrdom of Nurse Cavell,” reported Sydney’s Evening News, also noting 'the introduction of the art titles along the lines of those adopted in Triangle plays.’

America’s Motion Picture News considered it “a very good production on patriotic lines … the production is all that could be desired, while artistic subtitles, designed locally by Syd Nicholls, add greatly to the general tone of the picture.” Nicholls contributed illustrated film titles to a number of later Australian films, including The Sentimental Bloke (1919), and the film adaptation of his own beloved comic strip 'Fatty Finn’, The Kid Stakes (1927).

Early reports suggested The Murder of Captain Fryatt would be an even bigger hit than Nurse Cavell. Alas, though the picture was shown all over eastern Australia, it failed to capture the public imagination in the same way as its predecessor had. In the course of only a year, with the bitter struggle over conscription in mind and the worsening situation overseas, sentiment had turned against propaganda, and towards more escapist fare. The film was considered a financial disappointment.

Though there were initial plans to show the film in England and South Africa, it appears nothing came of them. Jack and Agnes Gavin were forced to abandon the ambitious slate of films they had planned after the completion of one last production, A Convict Bride (1918), a version of the famous Australian novel For The Term of His Natural Life. Gavin later found work in Hollywood as a knockabout comedy actor with the Hal Roach company, of Laurel and Hardy and Our Gang fame.
​
As for Fred Wilkins, it was much to his disappointment that The Murder of Captain Fryatt represented both the beginning and end of his brief film career. He remained a film buff for the rest of his life, which was a long and interesting one which included such adventures as becoming a successful businessman, taking a flight with the legendary Sir Charles Kingsford-Smith, winning the lottery, and meeting your author several times before his death at the ripe old age of 96.

Knit Your Own Authentic World War I Soldier Socks 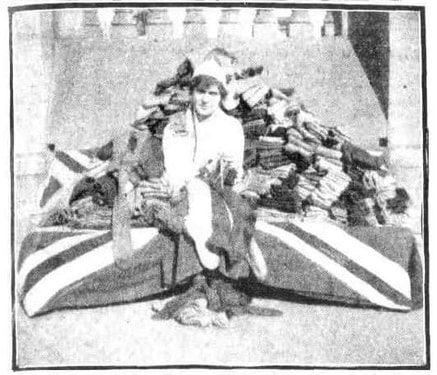 Source: Sydney Mail, 20 July 1918
When Margaret’s brothers Arthur and Jack marched into battle, it was an official requirements that each soldier always have three clean pairs of socks on hand - not only because it was cold, but because the wet and muddy conditions were an ideal breeding ground for ‘trench foot’. This condition was painful and debilitating to men who must sometimes march many miles per day. In some cases it was even fatal, if it progressed to the point of gangrene.

Women in Australia - and many men and children - took to the task of supplying the soldiers with gusto. Knitting was not only a means of distraction, but a way to make a genuine contribution to the war effort. Socks were knitted by the thousand, and Margaret mentions working on a pair many times in her diary during 1916.

Sometimes, knitters would slip in a note with a patriotic or sentimental message to the eventual owner of the socks. According to one newspaper, at least one cheeky digger sent his own piece of doggerel back to the well-meaning knitter who was responsible for his pair:

“I’ve got yer socks,
They’re an all right fit,
One I use as a helmet,
The other as a mitt.

For the knitters with a little more know-how, here is the pattern Margaret followed, which she jotted down in the front few pages of her 1916 diary, possibly borrowed or adapted from one of the many patterns published in newspapers.

Margaret Higgins’ Authentic World War I Sock Pattern
​
Cast on 60 stitches, 20 on each needle.
Do 1 row plain, then about 5 inches ribbing. Purl, plain then plain until length desired (10 or 11 inches).
Make a seam stitch down centre of sock by knitting last stitch purl.  Divide stitches for heel as follows:
30 on back heel & 15 on each front.
Do heel as follows:
1st Row, slip 1, knit 1 to end.
2nd Row, purl to end.
Now on right side do until 9 stitches are left. Then knit 2 together until leaving only 7. Then turn and purl until 9 stitches are left. Then purl 2 together, leaving 7 at other end.
Then continue these 2 rows, taking 1 off each end until only 14 stitches are left.
Then pick up 20 stitches at side of heel flap.
Then knit the 2 lots of 15 stitches on to 1 needle, then pick up the 20 more stitches on other side of heel flap.
Divide the 14 stitches, giving 7 on each side, thus having 27 stitches on each sock needle and 30 on the front needle.
Decrease every second row until 15 stitches are left on each back needle. Plain knit [until] 9 ½ inches in length.
Then decrease for toe every 2nd row until 10 stitches are left on each of 2 needles, and finish off.

(The following is added as a note, and might have been a practical modification of the original pattern)

​Measure 4 inches or 3/12 inches in purl, 8 ½ altogether before decreasing for toe. 11 inches before the heel.

The 1916 Film Diary On Display 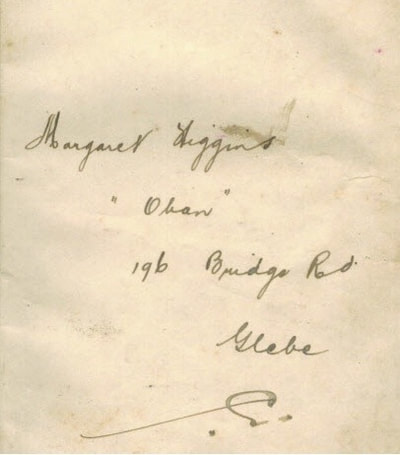 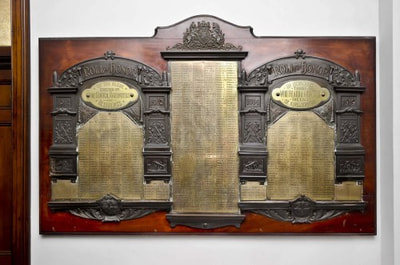 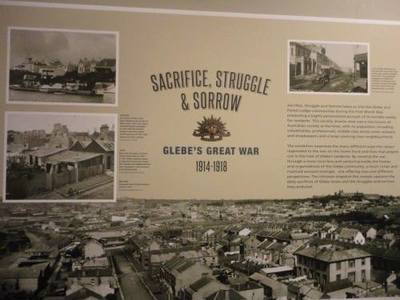 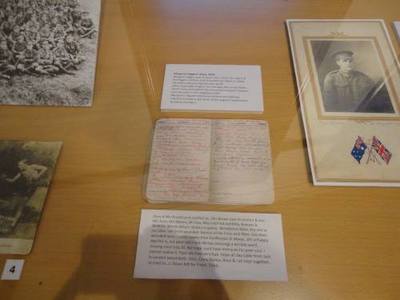 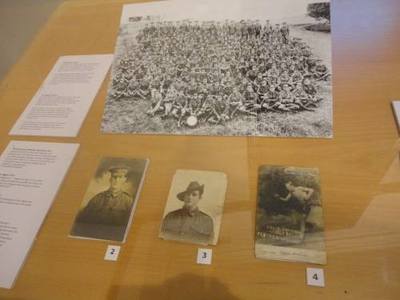 In 2015, pages of Margaret Higgins’ diary and a number of unique original artefacts related to her life were placed on display at Glebe Town Hall as part of the Glebe Society’s exhibition, Sacrifice, Struggle and Sorrow: Glebe’s Great War 1914-1918.

And, if you are in the Glebe area, you might be keen to take the 1916 Film Diary Walking Tour.

Fred Wilkins' Copy of 'A Pictorial History of the Silent Screen' 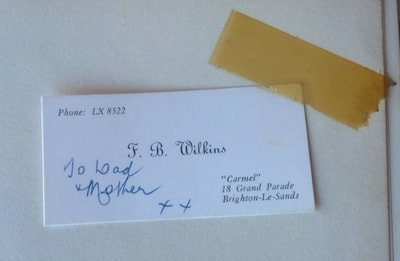 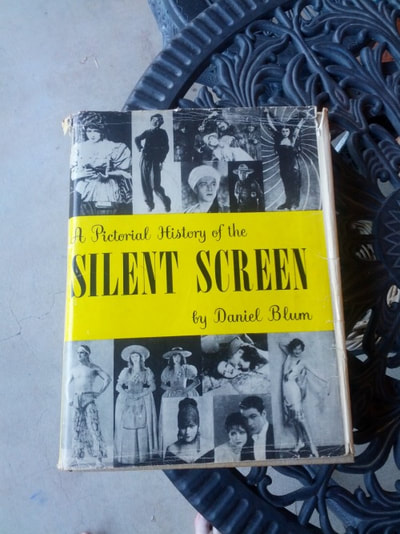 Here is another sweet little epilogue to the 1916 Film Diary that I discovered recently.

Most serious silent film fans will have a copy of Daniel Blum’s classic reference book A Pictorial History of the Silent Screen (and if you don’t - find one!) Here is my copy, which was originally a present from Margaret Higgins (‘Mum’) to her husband, Fred ('Dad’).

Both remained film buffs all of their lives, and when they began to hire film prints to show their own children the pictures they had loved when they were younger, the first feature they selected was a William S. Hart western - possibly even one they had first seen in 1916.