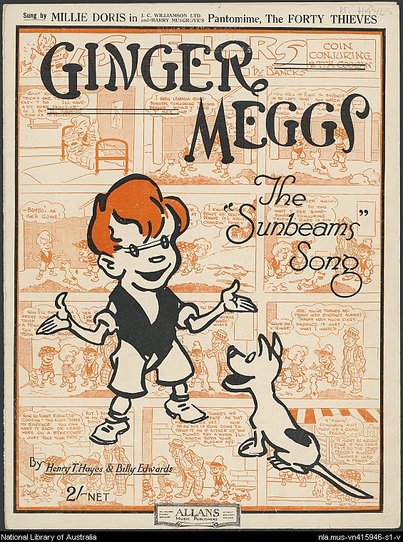 Sheet Music for 'The Sunbeams Song', featuring an early rendition of the evergreen Ginger Meggs. Source: National Library of Australia.
While Smith’s Weekly became the first Australian publication to offer regular cartoons in 1920, it is Sydney’s Sunday Sun newspaper which is generally credited with kicking off the golden era for Australian comic strips. The twenties represented a boom time for the newspaper media in Australia, with an unprecedented number of titles jostling for the public’s attention in the morning, evening, and on the weekend, where the all-important Sunday edition was the biggest seller of the week. Giveaways, special offers - no gimmick was too great to attract readers from a rival publication.
​
The latest salvo was fired on 9 October 1921, when the Sunday Sun introduced Sunbeams, a childrens’ liftout section edited by Ethel Turner, the well-known authoress of the classic novel Seven Little Australians. On 13 November, the section gained a colour comics section - much to Turner’s distaste, but to the satisfaction of editor Monty Grover, who saw an instant uptick in circulation. 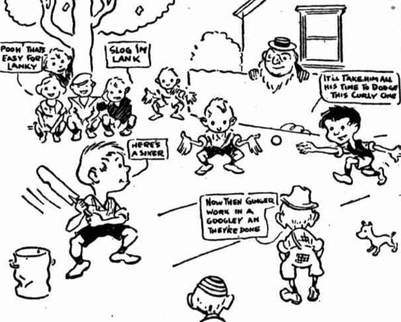 A frame from an early Us Fellers comic strip, featuring a soon-to-be-familiar young man bowling a googly. Source: The Mail (Adelaide), 5 July 1952,
The central attraction of Sunbeams quickly became a comic strip called Us Fellers. This told simple stories about a group of neighbourhood scamps who find themselves in various scrapes, from which they are always rescued by a sweet little girl named Gladsome Gladys. Creator Jim Bancks soon found that readers were less interested in the slightly tedious Gladys than in the adventures of the 'fellers’ - in particular, a redheaded mischief maker who made his first appearance in December 1921.

Within a year, 'Ginger Meggs’, as he was christened, had become the star of the strip, which gradually gained the supporting characters that are still known and loved today - Ginger’s bossy mother and skinny, nervous father; his love interest Minnie Peters, best friend Benny, nemesis Tiger Kelly and rival Eddie Coogan. The strip was expanded to the Melbourne market via the new Sun News Pictorial in September 1922, and made its way to other states in subsequent years.
​
By 1923, Ginger Meggs was firmly entrenched in the Australian public imagination - the subject of songs, vaudeville acts and fancy dress costumes, and a popular name for racehorses, greyhounds and pet cats. The strip retained its popularity through the decades, and is still published today.

By the time tot Eileen McGrorty dressed as Ginger Meggs in 1926, his distinctive black vest, bright red shorts and matching hair were recognised all over Australia. Source: Daily Standard (Brisbane) - Saturday 12 June 1926.
Rival newspapers soon noted the bump in circulation that Sunbeams gave to the Sunday Sun, and set about creating their own comics sections. Some cut corners by importing cheap syndicated strips from America. Others were determined to support local talent.

Errol Knox, the decorated war hero who had established Smith’s Weekly as the birthplace of Australian cartooning, moved on to edit Sydney’s Evening News and its newly established Sunday News in 1922. His enthusiasm for developing Australian cartoonists was such that he even imported copies of popular American strips to provide a guide for local artists. After discovering such notable exponents of black-and-white art as Cecil Hartt and Stan Cross, he worked closely with his senior cartoonist at the Evening News, Syd Nicholls, on creating a comics section for the new weekend edition.
​
Two strips by local artists made their debut on 16 September 1923 - the Billy Bunteresque Fat and His Friends, by Syd Nicholls, and Curly Hair and the Dear Little Bear, a narrative strip for young children, by Cyril Samuels.

Like Us Fellers, Fat and His Friends quickly moved away from its initial premise, and the tubby, rather unpleasant schoolboy Hubert Finn began his evolution into the personable boy scout ‘Fatty’ Finn - Ginger Meggs’ only real rival for the title of Australia’s favourite comic strip character of the early twentieth century.

Fatty was not Ginger’s only challenger. At the behest of their editors, many cartoonists concocted obvious Us Fellers knockoffs, including Aub Aria’s Aria Kids, R. Shaw’s Billo and Co, and even The Blimps, written by James Bancks himself for a different publication. It is no coincidence, therefore, that Baby Bear and Curly Hair was soon discontinued, to be replaced by another Us Fellers-esque strip by the same artist - Those Terrible Twins.